The POD is Back! 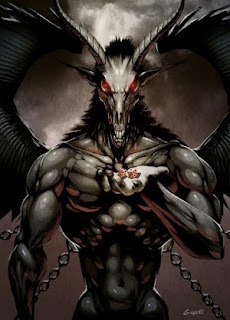 It’s September and guess what that means? It's PODdy POD time again! Yes, I am once again taking a course with my greatly misunderstood POD. My POD whose initiation rite consists of mercilessly flogging new innocent blood and making them squirm in fear to the point of meltdown. My POD who has dispatched many students in fits of tears as they leave and curse him to all eternity. My POD who causes much emotional pain in his quest to teach his minions proper English and give them some semblance of an education.

*sigh* I miss my POD. This should be fun.

Another course with him. Hmm? What can that mean? Well, discomfort for starters. Then, emotional pain which in time will segue into horrific meltdowns because he's just so crazy and over the top. But what I look forward to the most will be watching the newbies squirm. Oh, yeah, I've been there. He is not the most agreeable and gentlest of teachers at first. At first. He tests you. It's not that this is how he gets his kicks; it's how he gets to know if you have it in you and how formidable of a student you will be. So time will tell whether these newbies have it in them to make it through or not; taking his course is not for the weak. I can already see how horrified he will be at learning how much of himself he will have to give - oh, the hours and the pain! - when he finds how tragically we are slaughtering his English language. Oh, yeah, I can’t wait.

It’s been awhile since I’ve been inside the POD's inner sanctum genuflecting at his intellectual greatness. Like innocent lambs to the slaughter, this new blood will have no idea what they have just signed up for and what they will be expected to produce. The man will not accept ordinary or mediocre or for you to simply coast because you don't want to give 150% and you just want to give enough to pass the damn class and get your three credits. No. You will produce with blood, sweat and tears and nothing less and believe you me when I tell you they will be crying and at some point you will be left standing in your own pool of blood. Some will regress and stick their thumbs in their mouths and begin to cry for their mommies; others will just simply laugh in nervous horror and drop the class.

Well, I am no longer a newbie and he no longer scares me. I’ve been challenged to the extreme by this man and have been taken to the precipice of madness where he has wickedly whispered in my ear to “jump” simply because he felt I would never be able to produce anything he could ever be impressed with and I was simply wasting his time. When I refused to cower in fear or scurry away like some frightened animal and instead simply looked him straight in the eye and responded, “you first,” I won his respect. He finally smiled, nodded his head, and said, “well done. Very well done.”

When I emailed him today to say hello and tell him that I’d be taking a course with him once again, he was happy. The POD has grown a certain attachment to me and he seems to really, really like me (I say this as I hold my Oscar a lá Sally Field). Well, I really, really like him as well and I think we should each start our own fan club.

And, of course, those inevitable words will eventually be said, “How is your novel coming along?” To which I will respond with a million excuses of why it hasn't progressed since the last time he asked me and I will fail to look sincere because I can’t lie to save my life. The Novel – with a capital T and a capital N because in my world it requires it – has been on the back burner for a solid three months. After my manic commitment where all I did was eat and sleep Zafalon, I couldn’t and didn’t want to channel that freaky kid anymore. I needed a break. Summer beckoned and my mind went on vacation. The birds were chirping and I wanted to join them, the grass was growing and I wanted to sit on it with a blanket and a bottle of wine and block of cheese; there were flowers to be planted, beaches to visit, people to see and BBQ with, and places to go. You get the idea. I wanted outdoors, I wanted my weekends, I wanted, I wanted, I wanted. What I didn’t want to do was write. So, I am sure the POD will be disappointed when I tell him I was on hiatus and I will probably loose some of his respect because I have now shown him how undedicated I am and what a loser I can be and he abhors undedicated people and losers, most of all. Oh, what the hell, I needed a friggin’ break, so there! That’s what'll tell him! Yeah, right.

But, summer’s gone and it’s time to get serious again. I can write prolifically during the winter months because I am nester in winter and can spend entire weekends indoors and be completely happy in my zone just writing away. I can finally channel creepy Zaf once again and his creepy friends and begin to pen, pen, pen with much promise. And, maybe this renewed commitment will sate the manic, hard-to-please POD for a bit, or maybe not. I shall soon see. But if you never read another word from me again, then you know the man was not pleased and has sent me to the bowels of Hell where I obviously belong.

A change, some rest, nice entertainment and to bum around is good too. Then you come back with more energy, more inspiration and your magic pen (the one that connects your thoughts to the paper) works wonders. I know the POD won't be disappointed after teh sumemr break. And now you know him, lol. I'm sure he's not that bad and in the bottom of his heart he's a good teacher.

Good luck with your novel (The Novel). I'm eager to hear again about Zafalon.

It's all in good fun! He's an excellent teacher! That's why I keep going back to him. In the beginning I must say his methods were questionable, but then you got to know him and underneath that tough armor lies a good heart of gold. He genuinely does care about the students and students, truthfully, fall on two sides: you either love him or hate him. I fall with the former.

Sounds like your class will be a LOT of fun... hmmmm... no, actually it sounds exciting! Can't wait to hear it goes, mi amor.

Yeah, my first seriously mad professor of music theory at Michigan was like that and my graduate English Oxford professor was the same. I was too green to understand my freshman year that it wasn't personal.

Guess what? I was just as naive with my graduate school professor. But my fight was different. I wasn't trying to please him and we had it out often right in class. I could have sworn this guy hated me. Some of his notes were like "WOW, what's up with that?" I got an A+ in the class and he wrote me the best note afterwards.

He was heading back to England after teaching in the States for 25years. "If you ever need a recommendation," he said on the last day of class, "you can contact me in England. It would be my pleasure." I was shocked!

All the very best in your writing! Do let us hear from you every now and then. OK?

This is great :)
And you'll excel in this class :)

OK I know this is probably a stupid question but what is a POD?

©Rebecca Bush 2007-2017. Unless otherwise indicated, all text on this blog is copyrighted and may not be copied, reproduced, or distributed without permission.